I received an email from my colleague Don Ramkin who has been a regular visitor to Rendlesham Forest over the years and who is now very much involved with paranormal investigations from his neck of the woods in Bexleyheath, London:

"I had to contact you as last week, 22nd April to be exact, my brother called me to the back garden and pointing north asked what an object was that he'd spotted high up, but it could be seen as a dot with the naked eye. I grabbed my binoculars that are 7 x 50 magnification and upon finding the object, wasn't quite sure what I was looking at, as it looked like what I thought was one of those parachute type kites, but then it was too high up to have been and I couldn't see any kind of chords attached but it looked as though it was changing shape. I then thought it must be helium balloons that had gotten loose but then the realisation hit that this object was totally static in the clear blue sky and even though there WAS a breeze in the air was neither gaining nor losing altitude and now seemed to be rolling on the spot. But we watched it for at least 10 minutes until it simply seemed to disappear and I scanned around but just couldn't see it anymore.


You can imagine my surprise when on Thursday April 28th I bought a copy of The Sun newspaper, and on page 43 was a story and still photos of an object that had been filmed by a Dutch tourist over Westminster Abbey in London and what he describes is EXACTLY the object myself & my brother had been watching over our area , and upon watching the actual footage it just confirmed it for us that this was the same object we had seen and that it was acting in exactly the same manner, but I thought I would let you know of this weird sighting.
See the tourist's video Here
Source : The Sun Newspaper 28/4/11

"I have always been into the paranormal since a young age & was definately the weird kid in school for whilst most other kids were going to Butlins or days out (not that we didn't do that at times), I was quite happy to spend hours in cemeteries, finding them both peaceful yet busy as I could always sense something around me, but from 12 years old I got into ufology in a big way and read all I could about them. I was fascinated by the universe and planets, and watched all the documentaries on ufos and still do now. Then, when I was 18, I began attending skywatches, conferences, and seminars and met some good people in the field of ufology along the way and so it just carried on from there, but I must point out that I've always held a fascination for everything in the paranormal field, from ufos to hauntings to strange creatures etc.' as I like to keep my options open.

As you are aware, I spent at least 10 years every single weekend going to Rendlesham forest in Suffolk where the 1980 incident occurred, attending skywatches including the one Malcolm Robinson organised in 2004. I've attended when Larry Warren has returned and walked us round (he refers to me as Alice Cooper) and I also attended the recent 30th anniversary conference at Woodbridge. I saw my first black triangular craft pass over Boasts Field silently in 2006, but whenever I am in Rendlesham Forest I get a heightened feeling of spirit activity and have seen shadow beings, as well as photographing and experiencing some pretty weird stuff in there, but more than that - bizarre as it sounds - it was the 10 years visiting the forest that sent my psychic abilities into overdrive for which I am eternally grateful as it helped me to move onto a career in paranormal investigating on a more professional level. I can now be found as a team leader/crew/medium in a Kent-based paranormal team called Haunted Places Paranormal Investigations where I've been for just over 5 years now, and with the team have investigate 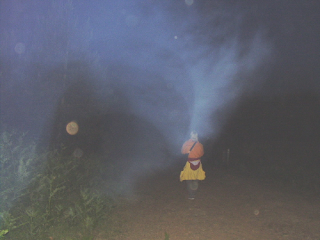 d some pretty cool locations (check out http://hppi.spruz.com/ ). I've also sat in closed circle over 5 years now and am very controlled with my spirit links and my guides. I also regularly attend spiritualist churches; in fact I most definitely class myself as a spiritualist, but I've never stopped believing that we are not alone in our universe and that extra terrestrials have been visiting us for centuries. They have walked amongst us and both the British and U.S Governments are guilty of massive cover-ups and mis-information, but the truth needs to come out, so who is it who is afraid of the truth? Certainly not the public!"
Published with Blogger-droid v1.6.8
Posted by Haunted Skies at 14:31