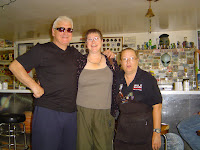 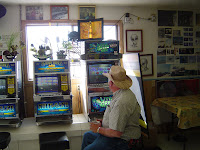 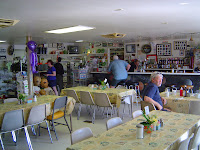 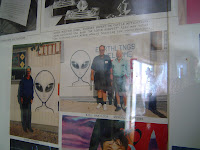 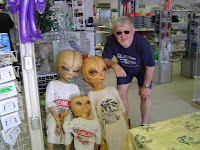 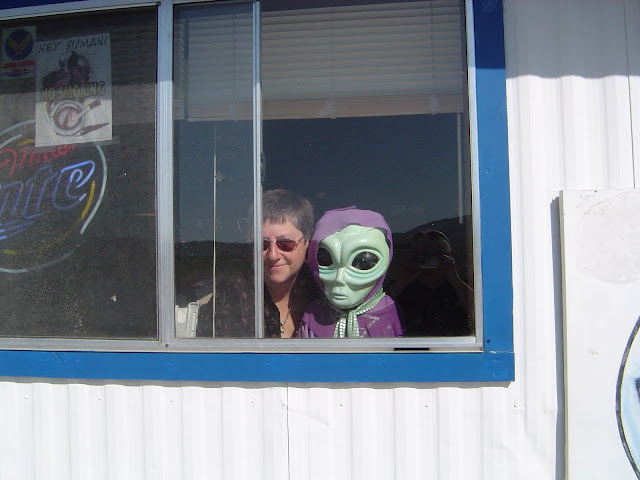 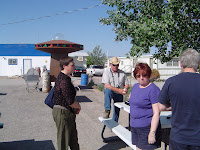 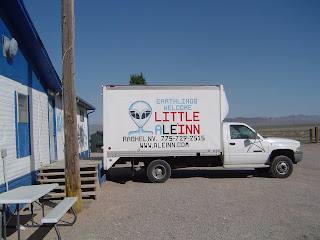 We arrived in Rachel, Nevada, during the early hours of the morning, with our friends Pauline and Pete, and were surprised to find that instead of a bustling town full of UFO enthusiasts, it was a small complex of mobile homes surmounted by the now world-famous Little A'Le'Inn. After checking out the room and looking under the bed to make sure there weren’t any other house guests, we then proceeded to make effective repairs to the ball cock, which had come off its screw-fitting on the toilet!
We then met up with two UFO researchers and had ten minutes watching the sky, while sipping a hot rum and coke.
We had hoped that we would meet up with Glenn Campbell, who moved to Rachel in 1992, where he first worked out of the Little Alien shop before opening his own store. Unfortunately, he had already moved to Las Vegas, leaving the management of the store to locals and others.
The Little A'Le'Inn was purchased by Joe and Pat Travis in 1988, and is the only place for a meal within 50 miles. It is a combination of restaurant, bar, UFO museum and gift shop. We tried the Alien Burger, which is a hamburger served on a French roll, and were pleasantly surprised.
Sadly, Joe Travis died in September of 2003 after a long illness. But Pat, with help from family and friends, is still keeping it running.
If you’ve never been there it’s well worth a visit if only to look out on the desert road that appears to stretch to infinity, making one realise just how tiny us humans are!
Posted by Haunted Skies at 03:00