UFO captured on Film from the Haunted Skies archives 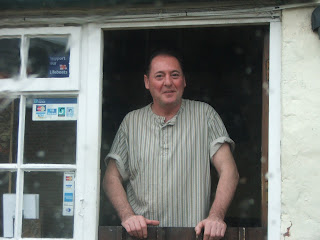 We learnt of a UFO captured on film by Peter Saxon, the licensee of The Swan public house at Alderton, a small village near Woodbridge, Suffolk.

We decided to visit him in order to learn more about what had happened at 2am on the 26th of October 2004. In the meantime we received a telephone call from a young lady who told us she was a representative of a well known UFO organisation and wished to meet up with our friend Brenda Butler. We agreed to take her down – little did we know what was in store for us!

We travelled down and met Peter, and found him to be a genial host - a pleasant, friendly man with an enquiring mind and still keenly interested in the extraordinary events that had taken place, now nearly 2 years ago.

He told us: “I was awoken by shouting coming from outside, and after getting dressed, went into the back car park where I saw what I initially thought was a helicopter, hovering in the sky over the houses opposite to the Swan. I soon realised this could not be the case as the ‘light’ began to move erratically over the sky, at which point I could see it had a jet black dome with a long rectangular bar underneath with a group of lights at each end. I could see it ‘shaking from side to side and moving up and down.

I rushed into the pub and picked up my Sony camcorder hi-8 video camera and rushed out expecting to see that there was nothing there, but looking upwards into the sky I spotted it once again - but now much higher, surrounded by a luminous blue field; I then took a short clip of film lasting a few minutes long before losing sight of it.”

We introduced him to our lady companion, who recovered the film and promised that it would be examined at a later date. After returning to the West Midlands, we dropped the 'rep' off who found herself in the same position at the end of the journey as she was at the beginning - in dire straits and penniless.

We should have known better! She caused us a lot of grief and told Mr Saxon the film was rubbish! We felt very angry that we had allowed ourselves to be manipulated by this lady, so the moral in the story is be careful who you invite into your house! We are now very guarded to say the least! We drove down to see Pete, who was very upset, and examined the film for ourselves.

As a result of the incident Peter contacted the Evening Star, which published an article on the 26th of November 2004: 'Were bright lights over Village a UFO? X-file is opened by residents’. The article also contained details of another witness, Rick Thompson, who also saw the phenomenon, and we spoke to him later. 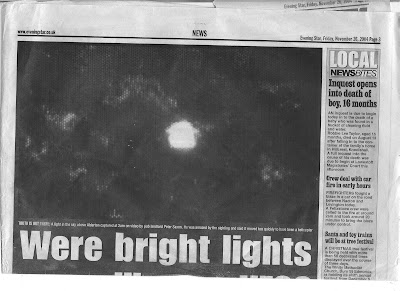 He said: “I was awoken by my six month old baby; I looked out of the window wand saw a bright light, stationary in the sky it was to bright to be a helicopter , and too big, and was completely silent. Then it began to move erratically in the sky making these peculiar up and down backwards and forwards motions, I found it quite frightening”.

Unfortunately, by the time we were in a position to examine the film taken by Peter - 2 years later - time had taken its toll, and a good portion of the film (some 9 minutes) towards the end of the clip had been inadvertently erased, leaving us with a total footage of approximately 65 seconds.

We felt there was sufficient information contained within the footage to extract some images, rather than being faced with the impossible task of trying to obtain stills from film of a UFO taken at maximum distance to the observer on the ground. 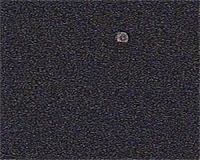 Of that 65 seconds, the first five seconds showed a brightly lit object darting about in the sky, big enough without the apparent application of a zoom lens, to show something fairly substantial, viewed at an angle of approximately 90 degrees off the horizon. It was possibly 5-10 miles away and likely to have been over the sea, but - of course - there were difficulties trying to establish distances and sizes without any other frames of references, bearing in mind this clip of film was taken after the object rose upwards in the sky. 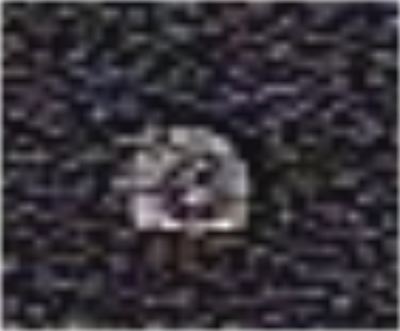 Published with Blogger-droid v1.6.8
Posted by Haunted Skies at 13:14