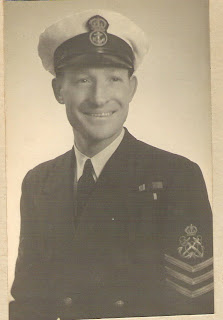 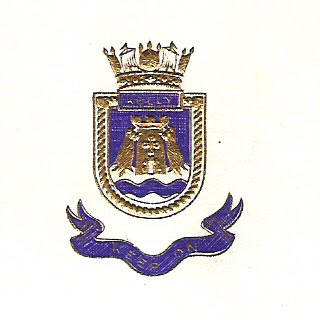 My ex -Father in Law CPO Ted West who served aboard HMS Kelly.

Ted West was my ex-father-in-law; I knew him until he passed away in the early 1970s.

I look back with pride at this period in my life when I had the privilege of knowing a man who had served on HMS Kelly, during nd World War Two.

He was very much a man's man, and liked nothing better than reminiscing about his Royal Navy days suitably accompanied by dubious-looking bottles of brown homemade beer, which had one hell of a kick; on more than one occasion I staggered out of his house in Selly Oak Road, Birmingham, on the point of imminent collapse!

I remember with great pride that occasion when during one of the Kelly reunions, held in London on HMS President. I met Prince Charles and Lord Louis Mountbatten, who had been the captain of the Kelly. 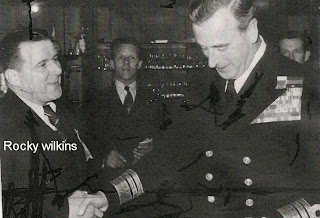 I have been meaning to publish his diary of events; one day I will! I remember him telling me of being on duty at shore leave. I think it was Hong Kong circa 1939. When he was in the habit of striking the posteriors of the 'ladies that favoured the attentions of the seaman on the duty.' Hhmmm; not the done thing, now, Ted!

Extract from his diary:

I was sixteen years of age when I left Birmingham to join the Royal Navy. The first ship in which I served was the coal burning Battleship Emperor of India. After serving a number of years abroad in the America & amp; West Indies, I returned to Chatham. Following which I enrolled in a course of gunnery.

In March 1939 I was posted to HMS Cornwall for duties during its commission at the China Station, at this time Japan was at War with China. At 01130, on the morning of the 23rd of March, we left Portsmouth Harbour behind as we started on our long journey, carrying out practice drill on the .4” and .8” gun.

Before being mustered on deck where we were addressed by the Captain who told us that German submarines had been spotted, following which lookouts were then posted, and depth charges made ready, you can imagine the excitement this created, heightened by the ship now beginning to move a zig zag course.

The next day, the ship was turned round and we headed back to Portsmouth,Apparently one of the Marine sergeants had been taken very ill where we arrived. At 1530hours, to allow the patient to be taken off the ship, once again I had to endure the same pangs of homesickness when I saw the familiar places pass by..

The weather was much improved today, and after the usual Sunday division,The Captain spoke to us about the coming crisis, and fighting efficiency of the Ship, the rest of the day was taken up with sunbathing in the forecastle.

Today the ship altered course to the West, during the day we closed up for more drill arriving at Gibraltar at 1200 landing ratings ashore. At 1600hours I played my first game of tombola and walked a ‘talkie’ in the ships cinema

The Captain spoke to the ship he told us that there had been a change in plan and that instead of staying at our port of call we were going to Hong Kong, to fuel up and make our way to Penang expecting to arrive their at 0730hours,

I was then ordered together with other members of the crew to make ready the Walrus Aircraft, which was going to be catapulted off the deck the following morning. I must admit that we all felt a sneaking admiration for the pilots of these Aircraft commonly referred to as shagbats.

On the morning of the, the 30th of March 1939 the plane was launched as we approached Malta harbour, followedby the launching of a second aircraft – after this excitement we settled down to more mundane duties such as painting the ship's hangar.

Then when canteen leave was given I, I made my way to the Ships Cinema where I watched the ‘ Emperors candlesticks', upon my return I discovered that one of the stokers had thrown up over the Officer of the Watch! Everybody thought it was one huge joke apart from the poor stoker himself!

The next few days passed uneventfully, I spent some time on the side of the ship painting it, accompanied by other hands, I remember a bit of fuss which took place when one of the ratings refused to go up to the top yards, after feeling shaky after having spent a heavy night on the beer, to be fair the officer concerned didn’t order the man up.

Chapter 2: Through the Suez Canal to the Red sea.

At 0900 on the 3rd of April 1939 HMS Cornwall we left Malta Harbour and headed out to sea, the weather had turned for the worse with a Gale blowing causing the bow to dip into the sea, I clenched my teeth and fought to control my stomach, trying to recover from a previous evening ‘binge’ I was glad to turn in later. The following morning was spent at general drill; we closed up at action stations using the .4”gun to fire at a smoke burst, along with the ‘pom-pom’.

The next day we entered Port Said Harbour arriving there at 0630hours taking on fresh water and provisions, before commencing our journey through the Suez Canal which I found a pleasant experience"

Christine Smith his daughter now living in the States is shown on the far left next to her is Ann Wilkins whose husband 'Rocky' served with Ted. She told me that she did the 'chicken dance' with Prince Charles, what this entails I can only hazard a guess. 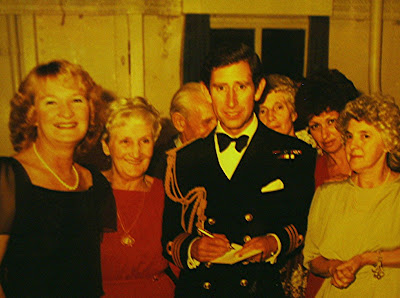 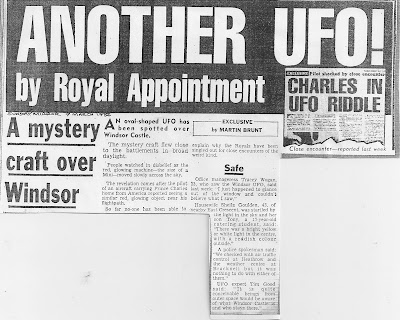