How it all began

A picnic with a difference –the roots of The Haunted Skies Project
Having survived the ordeal of driving back from our beloved publisher on Sunday night, after wrestling with the script of the 3rd volume, I found myself reflecting on the events that took place tonight when my son Christopher completed the marathon in London, followed by a different kind of marathon involving the considerable consumption of vast amounts of alcohol. Well done to Chris. 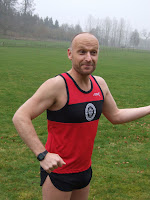 Chris was actually the catalyst for creating my interest in UFO investigation following his UFO sighting in 1995. Prior to that I did not have the faintest idea that such things existed! Here he is having taken part in a 7-mile run at a local prison. (No; he wasn’t one of the inmates!)
Last week my son Alex organised a family picnic outing to Symonds Yat, near Ross on Wye, Herefordshire, which is a place I last visited about 30 years ago. Suffice to say I can tell you that we have no plans to visit the said locality for the next 30years! 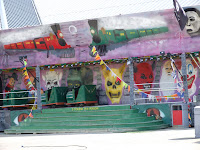 If there is one thing that makes us cringe about places like this, it is the amusement arcades situated a mere few feet away from the river, the tacky ghost train, and the unwarranted attention of young kids who have smelt the jam doughnuts, or is it the cold bottled beer? 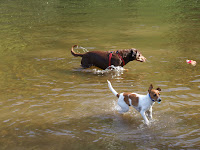 This was Derek's (Chris' dog) first swimming lesson.
The tackiness of the local shops clustered around the muddy banks of the Severn, and the general hubbub of modern-day life with young boy racers trying to out-vie each other racing up and down on the opposite side of the bank fades away.
When we see the local famer standing in the next field with a worried expression on his face, as he watches a sheep keel over and lie on its side. The poor sheep lies there in obvious distress and opens it mouth in pain but no sound is heard. Within a short space of time the baby lamb is born, head last - the famer rushes over and tenderly massages the new born baby and it is alive! What a magnificent experience. We are all reduced to tears. We didn’t have a camera but the sheer delight of what we saw stays with us…forever….

Email ThisBlogThis!Share to TwitterShare to FacebookShare to Pinterest
Labels: UFO