Clive, who lives in Wales, and whose spectacular UFO sighting in 1967 is contained in Volume 3, 1966-1969, emailed me: 'Dear John, I hope the attached article will be of interest. It was printed in the Wales On Sunday paper last Sunday. Note the PC address given with the piece, still enjoying your 2nd book. Cheers Clive.' 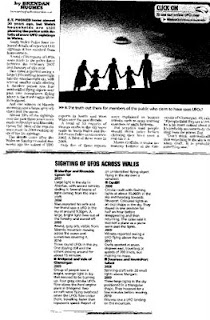 The cutting tells its own sad story with inane comments from people who refer to Planet Zogg. (I can almost hear my publisher's thoughts on this but I promised him that I wouldn't use profanity in CFZ blogs). However, the mind boggles with this sort of unadulterated silliness when a senior lecturer at Glamorgan University tells the public: "It's not somebody visiting from Planet Zogg".

A quick butcher's at the worldwide web reveals that Planet Zogg is a Sheffield-based website, and - I quote: 'Planet Zogg welcomes everyone on its journey through hyperdelia. Our events are home to clubbers and dreads, cyber ravers and hippies, disco dollies and punk...anyone who's up for a party .. and remember .. RESISTANCE IS FUTILE!!'

Well it’s nice to see that nothing changes with the UFO scene!

And now from the foolishness of a belief system that believes inherently that 99% of UFO sightings can be explained, we present a colour photo of now retired RAF auxiliary officer, Flt. James Salandin, MBE, who was stationed at RAF North Weald, Essex, near Epping (then attached to 604 County of Middlesex Squadron). 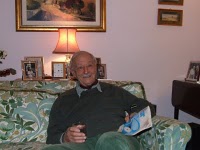 "Through the middle of these trails I could see three objects, which at first I took to be aircraft, although there was no sign of any vapour trail that one would associate with the movement of an aircraft in high atmosphere.
When they got within a certain distance, two of them went off to my port side; one was gold in colour, the other silver. The third object headed towards me and closed to within a few hundred yards, almost filling the middle of the aircraft (windscreen before departing towards my port side. I tried to turn and follow, but it had disappeared from view.

The object I saw through the front cockpit of my Meteor 8 Jet Aircraft was saucer shaped, with a ‘bun’ on top and underneath. I didn’t see any portholes, windows, or other exterior extrusions that one would associate with the passage of an aircraft through the air. There weren’t even any flames coming from the objects.”

If I had a pound for every UFO sighting report that involved the description of three separate objects or UFOs I would be a wealthy man. Why three? Anybody care to offer an explanation? I do have my own ideas on this.
Posted by Haunted Skies at 09:45