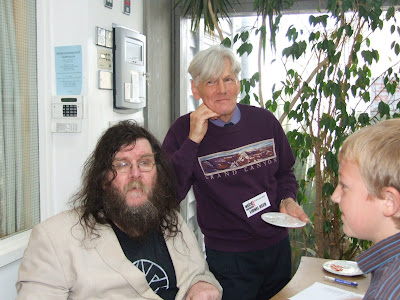 Our friend Lionel Beer rang us yesterday (2nd from the left) to tell us he is collecting four copies of Volume 2 during a personal vist to Chez Hanson in May.
This will allow us the opportunity to congratulate him for having had his long-term title of Life President of BUFORA reinstated. Also, Happy Easter to Jon Downes, our esteemed long-suffering publisher on the left.

Happy Easter, everybody. This is a friend of ours, Albert Rosales, who runs a website cataloguing all manner of inexplicable flying objects seen worldwide.

"Hello John & Dawn. Happy Easter! Good to hear from you. I am enclosing items and info."
Albert 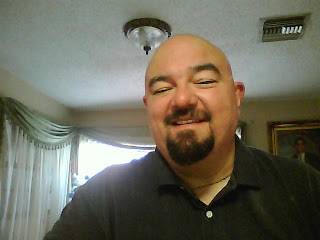 experienced several strange events which perhaps led me to my interest in everything anomalous and paranormal (have to find that file). I lived in Spain with the family in 1967, then moved to NY in '68, and finally to Miami in late '68. After graduating High School I did a four year tour of the Navy which included two European 'cruises' onboard the destroyer tender USS Yosemite (now retired) as a radioman with a top secret clearance. I even participated in a NATO exercise which included British ships (those chaps have liquor onboard!) and other countries, including Turkey.
"After the Navy I worked with my dad until he became ill. It was sometime after my first marriage in '87 when suddenly my passion for the unexplained re-emerged (to the chagrin of my wives) and I started collecting cases and investigating local events and have done since then. I have amassed over 14,000 cases (summaries) as of 2011."
Sincerely,
Albert
Published with Blogger-droid v1.6.8
Posted by Haunted Skies at 02:39