Not a magic mushroom! (a blog of nature today) 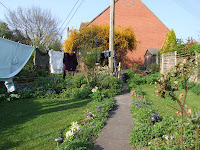 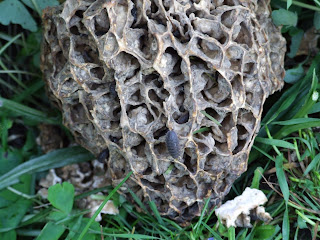 Dawn Holloway, who is as versatile in the garden as she is sitting in front of the desktop, would like to bring the readers' attention to a mushroom that has taken up residence in our back garden in not-so-rural Alvechurch, Worcestershire.

Is it a highly edible member of the Morel family, which grows in early spring - generally on wasteland, gardens, along roadsides and in woodland glades that are typically not overgrown - and can be identified by its dark, black ridges, which run vertically on the cap. The cap is often pointed, and its cap is cell-like. The cap can also be described as 'honeycomb'; the flesh is white and cream.

Dawn wonders if our illustrious publisher and now firm friend - Jon Downes - could confirm that this is an edible mushroom. If so, we look forward to adding this little morsel onto our toast, or maybe in a nice omelette, accompanied by a dash of red wine!

Sadly the best laid plans of mice, men, and plants came to nothing. A look at the mushroom revealed it had been partially consumed; one of the offenders is shown caught in the act!

This is our somewhat laid-back blog today...meantime Dawn is busy proof-reading the manuscript for Volume 3 of Haunted Skies, which has started to shape up nicely.
Published with Blogger-droid v1.6.8
Posted by Haunted Skies at 00:16