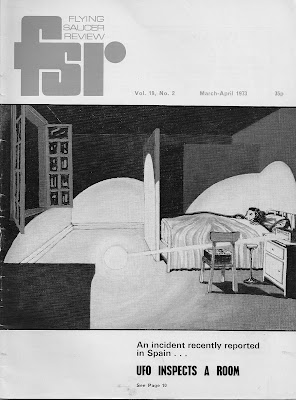 Gordon Creighton - the Editor of FSR - told us about a sighting, which took place on the 21/22/June 1972, involving French student Javier Bosque, who was awoken at 2.00am by a powerful light flooding the bedroom where he was staying, at the Escuelas Escolapios Theological College, at Logrono, in North Eastern Spain. Rather than present the whole extract, which was covered in Flying Saucer Review, Volume 19, No. 2, March/ April 1973, due to lack of space, we shall outline some brief details obtained from the witness, who was interviewed by Albert Adell and Pere Redon and which were then subsequently translated into English by Gordon.

Javier reported that a metallic, or totally smooth surfaced luminous egg-shaped light (not discoid), showing shiny and vibrating edges, entered his bedroom by opening the leaves of the window which had been left ajar. It then moved straight towards the centre of the entrance to his bedroom-alcove, while maintaining height of about two metres off the floor, without emitting any noise or sparks. Frightened, Javier covered most of his face and sunk as deeply as possible into the bed. The object then performed a sudden downward movement and stopped again. At this stage Javier noticed that his transistor radio, which had been playing prior to the arrival of the ‘visitor’, was producing some high-pitched bleeps. He switched-on the tape recorder and waited to see what was going to happen next. The object started a downward movement. When it reached a height of 40cms, it stopped briefly, and then:

“Put out a beam, resembling ‘the antennae of a snail’ in movement, first
towards the transistor radio, (which physically moved in a swaying action on
both occasions the beam hit it) and then the tape recorder. The beam withdrew
back into the object, which was about 5cms in diameter. It then rose up to a height of two meters off the floor, halted for a few seconds, headed straight for the window, and vanished upwards into the sky.”

Javier confirmed that after the event had taken place he made a through search of the room, but found no sign of any burns or marks left by the passage of the object through the room. (Source: FSR, Volume 19, No. 2, March/April 1973, from STENDEK Journal of C.E.1, the Centro de Estudios Interplanetarios of Barcelona, Albert ADell and Pere Redon)
Posted by Jon Downes at 12:07