We have just returned from our regular 200 mile journey from our house in the Midlands to see our publisher Jon Downes, who is fortunate to live in the tiny village of Woolfardisworthy situated a few miles from Bideford.

The PDF for volume 5 was updated with the latest information, and after an excellent meal with Jon and his lovely wife Corinna - assisted by Prudence the dog - we made our way back to the caravan permanently stored at Ashcroft Farm just outside the village. 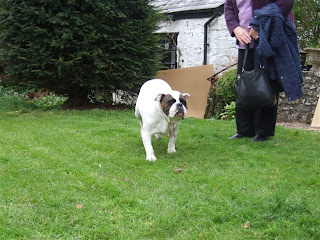 On Saturday afternoon we sorted out the back cover, and later on drove back to the caravan to relax a bit.  During the evening we took some photos of the moon which was large in the sky, it being the largest and closest of 2012, and for a change there was no rain! 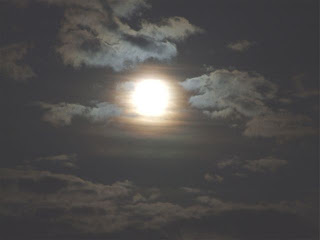 On Sunday morning we packed up and drove home. Unfortunately, due to the main road being closed for repairs, we were forced to take the diversion signs which took us through Ilfracombe  and ended up driving the ‘old route’, which took us over the infamous Porlock Hill.  Dawn is shown standing outside the AA box at the top of the hill.

Our descent down the hill brought back some frightening memories, as many years back I took a caravan over the hill with complete disregard for the safety of my then young family, after not having seen the signs at the bottom of the hill warning against this very danger.

On this occasion, I had a Rover 2.6 and just about managed it with the engine in first gear screaming, to get up and the brakes smelling and burning on the way down. 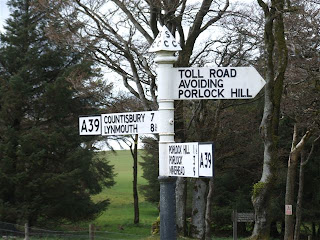 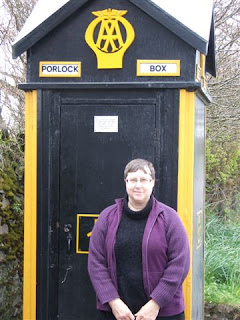 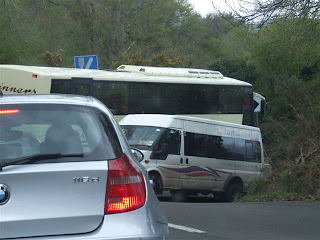 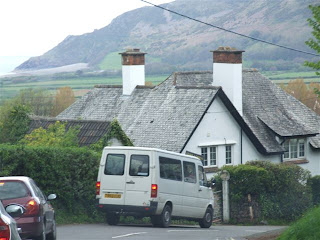 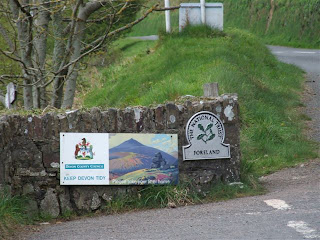 After getting onto the motorway, we stopped at Sedgemoor Service Station on the M5 and took this photograph of a walking Union Jack flag! 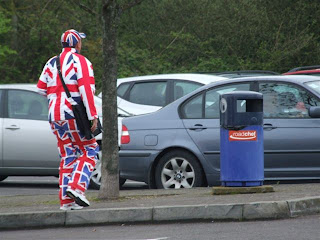 I have had the opportunity of checking the final PDF once arriving home and have found now just ten more errors. With regard to page 188, which needs filling, I interviewed veteran UFO researcher (and a thoroughly nice man) Roy Lake of the London UFO Studies, and this will go in on that page nicely. 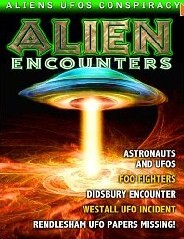 Canadian Wave of forgotten sightings circa 1973

This ‘wave’ of sightings reached its peak on the 21st of the month, and involved no less that 49 separate sightings. The local newspaper La Presse published an account headed ‘Flying saucers at Saint Hyacinth,’ on the 21st November 1973. This was followed by the Journal de Montreal, which printed an article titled, ‘Martians are invading Joliette’.

It is also worthwhile bearing in mind the nature of what was seen during a period of UFO history, now nearly 40yrs ago, to tell of another rather disturbing incident, which happened at the home of a married couple living in Joliette, at 2.00am on the 22nd November. It began when the woman concerned, who was having trouble sleeping, went into the kitchen to light up a cigarette. Suddenly, a white object appeared outside the window. Wondering what on earth it was, she went closer and was astonished to see:

“…A four feet tall ‘thing’, showing a rounded ‘head’ and two very bright eyes. They were three times as big as normal human eyes. Around the head or helmet was a kind of halo, or flames, surrounding the ‘head’; it had what appeared to be ‘lace’ around the neck. The shoulders were not square like human beings, but sloped down at an angel of 45°. I wasn’t scared because I thought it was so beautiful.”

After about fifteen seconds, the ‘entity’ moved out of view. The woman then ran into the bedroom and awoke her husband, who got dressed. He switched the outside light on, but there was no sign of the ‘visitor’. The family dog was found outside in a very distressed condition. The next evening the cat displayed out of character behaviour and was very unwilling to leave the side of the couple. (Source: UFO Quebec Magazine, Volume 1, No. 2, Director Wido Hoville)

During the same early morning (it may have been a few hours earlier) the local Provincial Police and Catholic Priest saw UFOs in the vicinity of Domtars Quarry, Joliette, where limestone is produced. The news of this sighting spread like wildfire with people thronging to the quarry in their cars, hoping to see UFOs over the next few days. The Army explained away the sightings as being a helicopter, performing military operations! Undoubtedly, it surely wasn’t this! Sadly, we do not have enough space to include all the sightings that happened during the period, but have selected what we consider to be the most interesting.