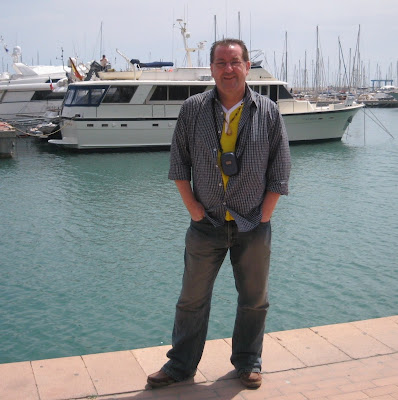 At approximately 9.20pm on 27th April 2007, Colin Grethe from Dundee, Scotland, was driving back from London, along the A470 country road, a few miles from Machynlleth, on a dark unlit night, listening to the music on the radio. He noticed a group of bright lights to the side, a couple of feet above the road, and an orange light on either side of the road, which at first he took to be traffic lamps, placed onto the road - then realised this couldn’t be the case.

“On the outer side of the orange lights could be seen a number of bright white lights, with other bright white lights above and in the centre, below the level of the other lights. At first I was confused as to what it was - then I realised I could see what looked like something resembling the wingspan of an aeroplane, approximately fifty feet in total, its shape 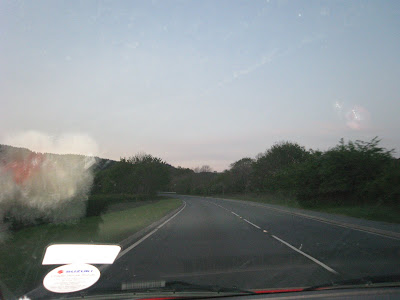 extending right across the road and a short length either side.

At each tip of the ‘wing’ were bright white lights, highlighting, in their illumination, a small vertical construction - a few feet in from each tip - between the white and the orange light. This seemed to give it the appearance of an old aircraft, yet the whole wingspan itself seemed made of a smooth shiny material. There was a bright white light at the centre, just below the wingspan, and also a glowing dome of white above the wingspan - similar in a way to a cockpit - in which I could see the top half? of two figures, or just two figures (bottom half concealed by ‘cockpit’) As it approached 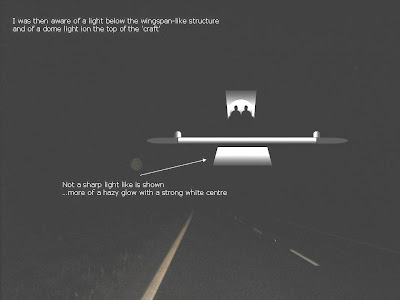 closer, descending lower, swaying from side to side, the wing going up and down, my immediate reaction was to wonder if it was an aircraft.

The white lights on the wings began rocking up and down, as if the aircraft was having difficulty in remaining straight and about to ditch onto the road before me. I thought to myself, it’s going to hit me - I was going to die. Those brief moments, as it came closer, seemed like an eternity, almost happening in slow motion. I checked my rear view mirror, but there was no vehicle behind me. There was no place for me to steer the car off the road, so I wondered whether my best option was to brake or just to keep on going, and hope to avoid a crash.

I breathed a huge sigh of relief as it silently passed overhead, but was puzzled not to see any tailfin. I glanced back and forth between my rear view mirror and wing mirror, anxious to see the shape pass fully over, but could see nothing. I quickly stopped the car and got out; looking back down the dark road I could neither see nor hear anything.

Trying to make sense of it all, I wondered if the aircraft had ditched into a field beyond where I could see in the darkness. So, I jumped back into the car and was about to dial 999 on my mobile phone, and report the incident to the Police, when I realised I did not know my exact location, and wouldn’t have been able to direct anyone to the site, so I quickly drove a few hundred yards down the road - until I came to a sign, on the edge of a village, called Cwm Llinau - and then I dialled 999, asked for the Police (recorded as 9.24pm) and reported what I had witnessed.

The 999 Police telephone operator was unable to identify my position as Cwm Llinau (was not on her map) so I rolled the car slowly forward, trying to find something giving the location, and within a couple of hundred feet, found a sign for a small caravan park and gave the Police Officer the name and area telephone code and number. The Police Officer told me she would despatch a police car out to the area and check with the RAF, to establish if there were any aircraft in the area.

She kept checking my location and asking details of the incident. Eventually, she came back to me and said that, although there had been a Hercules (a RAF military aircraft) in the area earlier on the evening, there was nothing scheduled there now. I offered to stay in the location to see the Police Officers, but she said it was not necessary. I sat in my car for a short time, to gather my composure. I thought there was going to be a certain crash, one which I may not have survived, and I could only sit and shake with fright, relief and disbelief. As I was driving home, I received a call from the Police. This time it was a different Officer, who checked all the details with me again and asked me to confirm my location (which was now on the border of Machynlleth). He told me no aircraft were reported to be in the area, and no other calls had been received reporting a crash.

The Police Officer told me one of his colleagues lived in that particular valley and they were contacting him. On arriving home in Aberystwyth, I found myself still shaking with fear, and took an hour to regain my composure. That night I contacted the Ministry of Defence (MOD) at RAF Cosford, Shropshire. They advised me there were no aircraft in the area at 9.20pm and they had not received any incident report, although they confirmed there had been a Hercules aircraft in the area, but it had been much earlier in the evening. They also pointed out it was extremely unlikely any aircraft had been flying low that evening, due to recent strong winds. I contacted Air Traffic Control, at Cardiff Airport, who confirmed no aeroplanes had travelled via the Machynlleth area from their airport, seeking to make some sense from it all. I contacted the airport in Welshpool. They, too, confirmed there were no aircraft in the area; indeed, their landing lights had been switched-off earlier in the evening, as they were not expecting any arrivals.

On the Saturday morning I contacted Caernarfon Airfield, in Gwynedd. Again, I was informed they had no knowledge of any aircraft being in that area at the given time, taking into consideration that no flights take-off from there after dark. Later on Saturday, I went to the Police Station to see if anything else had been reported. They seemed only concerned by the fact that no crash had occurred and so there were no injuries or fatalities. They told me the RAF had a Hercules aircraft in the area at the time I reported the incident, completely contradicting what I was told the night before, suggesting it was a Hercules I had seen. It seemed pointless to argue the point, so I left. The wingspan of a Hercules is 132ft 7ins; the aircraft I had seen was less than half that size, at approximately 50ft in total width. The cockpit on a Hercules lies beneath the wingspan, yet on the aircraft I had seen, the cockpit (or what I believe was a cockpit) was above the wingspan.

Although I cannot say what the aircraft was, I cannot claim, with any certainty, it was of alien nature. However, it remains ‘unidentified’ and was a ‘flying object’, so I have to refer to it as a UFO. What is worrying is that, despite a clear incident occurring, I have received no contact from the RAF. I can only assume their philosophy is that if it doesn’t show on radar, then it doesn’t exist - a somewhat worrying viewpoint in these modern times.”

In conversations with Colin we learnt of a previous incident, which took place in 1995/1996, when he and his colleague had experienced, while on the way home, after having attended a meeting at the Stockport Paranormal Group.
“This particular night we were travelling from Liverpool to Manchester, along the East Lancashire road, and were intending to purchase some fish and chips before 11.00pm, so kept looking at the time, knowing the place shut at 11.00pm. As we approached a set of traffic lights, which were on red, they changed to green and then straight back to red, out of sequence - then the car stalled. We didn’t get it started the fist time, but eventually managed to restart it. The next thing we knew was that it was 11.20pm. Neither of us could understand what had happened to the missing time.”
Posted by Jon Downes at 13:16