We are always on the look out for Illustrators who are prepared to see
their work in the books if you can help please contact us.Thank you so much
Robert Townshend for your hand painted contributions what a very pleasant man
you are,it was a pleasure to talk to you......

Volume 8 progresses towards completion 80% there!

I am sorry that I have been out of touch for the last few weeks; this was
due to the sheer intentsity of work load involved in writing up the Rendlesham
Forest incident for the end of December 1980, for Volume 8 (1980)! 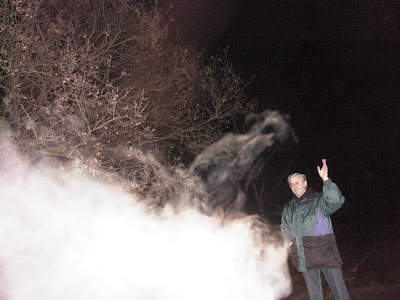 This has without doubt been the hardest task that I have come across so far mainly
because it is so demanding, having to ensure that the many photographs match the
script, but I now  anticipate that this chapter (page 217 to page 350 )will come to an
end within the next fortnight.

Aunt Betty has been in touch pointing out there are some typoografical  herrors
in the Blog, sorry about this but Betty but you will appreciate that we are preety
snowed under here with publishing writing, investigating etc.... I know that you
are a hard working person, so will consider your very kind invitation and thank you
so much for all of your assistance with rasing the profile of what we are trying to do 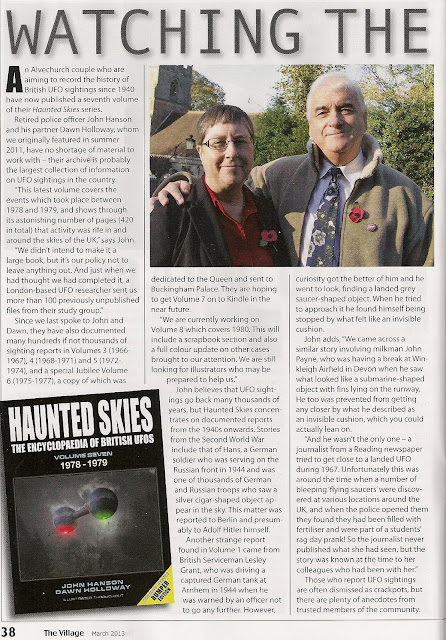 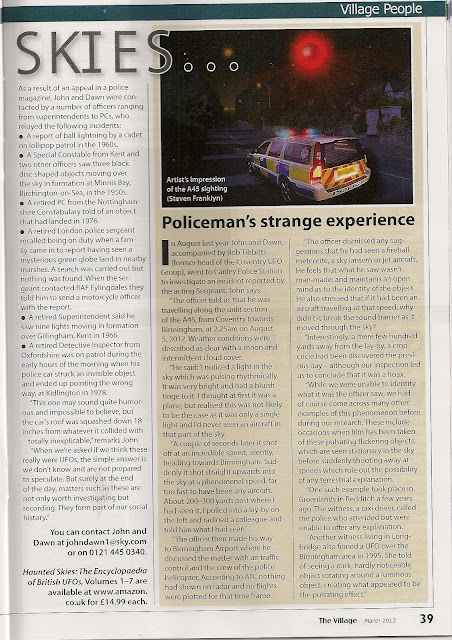 next time you come to see us there will be an extra  helping of custard!
If the book goes to 300 pages the cost should be the same i.e £14.99, but I will advise accordingly,bearing in mind that at the end of the day I  have to make something,
rather than run at a loss. 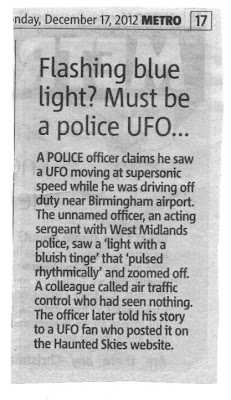 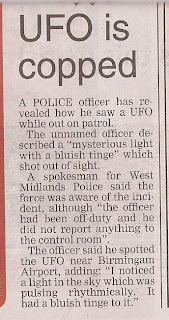 I see that the Sun  and Metro newspaper covered the sighting by the Police dog handler, in their usual tongue in cheek fashion judging by the banner grabbing headline! This was the same newspaper that asked for Volume 1 a couple of years ago and promised to publish an article about us, the silence is deafening,!

To add insult to injury I came across a reference to this case on UFO Data website while trying to get in touch with Russell Callaghan. Oddly there were only two sightings on this web page; one was the Birmingham UFO sighting. There was no indication of who put this material on this web page, although it was originally the domain of Russell Callaghan, if anyone can put me in touch that would be much appreciated. If Nick Pope had said this
(which I doubt) surely this is imagination run riot. For a start no aircraft were scambled to my knowledge!
I have no idea where this illustration has come from the Officer saw a light not a spaceship! 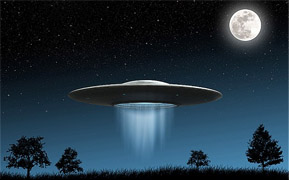 A police officer claimed that he had seen a UFO moving at super sonic speeds when he was off duty driving near the Birmingham airport. The officer reported that he had seen a ‘light with a bluish tinge’ that ‘pulsed rhythmically’ and zoomed off. A colleague then called the air traffic control and they said that nothing had been seen on their systems. The unnamed officer had this to say: ‘I noticed a light in the sky which was pulsing rhythmically. It was very bright and had a bluish tinge to it,’ the website reported the officer as saying.’ I thought at first that it was a plane. Then I realized, as it was only a single light, this was not likely to be the case.’ Besides, I had never seen an aircraft in that part of the sky.’ UFO expert Nick Pope, said: ‘This could be the real thing – a UFO in our airspace and military aircraft scrambled to intercept.’ 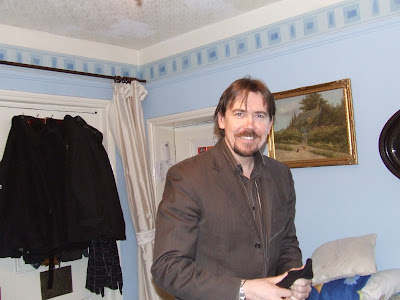 As a retired Police Officer who spent nearly 30years in the West Midlands Police force, I would like to say that if while on duty or otherwise some one had come up to me and reported having seen aliens or flying saucers. I would have believed they were either suffering from alcoholic intoxication or mentally unbalanced!

However my attitude was to change when my son Chris then a serving P.C. with the same force was asked to interview a Doctor who had seen something unusual flying through the sky over Moseley Birmingham in January 1995.Following that interview he and his colleague witnessed a saucer shaped object hovering above a tree in a suburb a short distance away.

My first response was to wonder if my son was playing practical joke but as he seemed serious I decided to conduct my own research wondering if such things existed. Over the space of some months I contacted a number of people who had witnessed a similar phenomenon at about the same time. Although the local newspapers had suggested it was a meteorite, I felt it highly unlikely this was to be the case and decided as time went by and other witnesses contacted me about their strange sightings to write a book, along with my partner Dawn Marina Holloway.

We decided the best course of action was to accumulate as much evidence as we could find and form our own conclusions based on direct interviews rather than second hand information. Obviously  as the years passed away this wasn’t always possible, but we persevered feeling that  this was valuable English social history, and  should be preserved .It shouldn’t be ignored or treated in the main with tongue in cheek comments, by the Nationals  which in the main has always been their attitude(apart from the local newspapers)       We have now published Seven Volumes cataloguing the events from 1940-179, which should give an indication of how prolific the sightings have been during those years.  Volume 7 is on Amazon .com (2013) and we invite you to have a look inside the book as there is a facility for the reader to do this.   At the moment we are working on Volume 8 which covers just 12months of British UFO history this will include our write up of the incident at Rendlesham Forest Suffolk in December 1980.

When Volume 1 was published we sent copies  of the book to various National newspapers including the Daily Telegraph ,who asked for them unfortunately we have never had one article published on us which seems rather odd, bearing in mind that we have been promised much but have been given little.

If there is one thing we have done it is to preserve the history of the British UFO phenomena but the silence is deafening, will this email change the things I doubt it, but one this is assured the books will continue to be published as we feel this is important evidence based on eyewitness testimonials from, senior RAF officers, Police Officers and  members of scientific based community who have never stated they saw aliens or spaceships, just that this is what we saw -make of what you will.