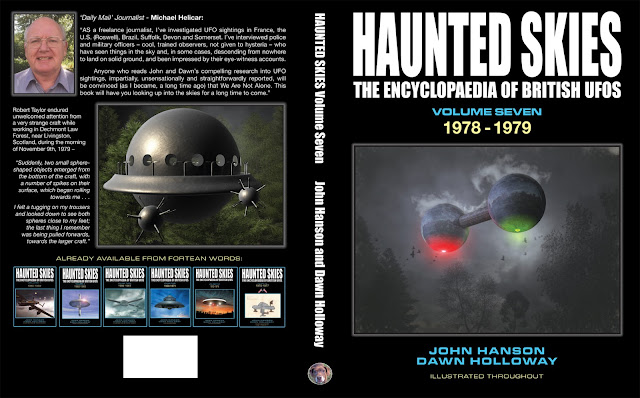 It with regret that we discovered Elsie Oakensen passed away some time ago,she was a lovely lady and loved by all. Sadly she never saw the front cover of Volume 7 which depicts the UFO she saw in 1978. Pictured on the left Dawn on the right..... 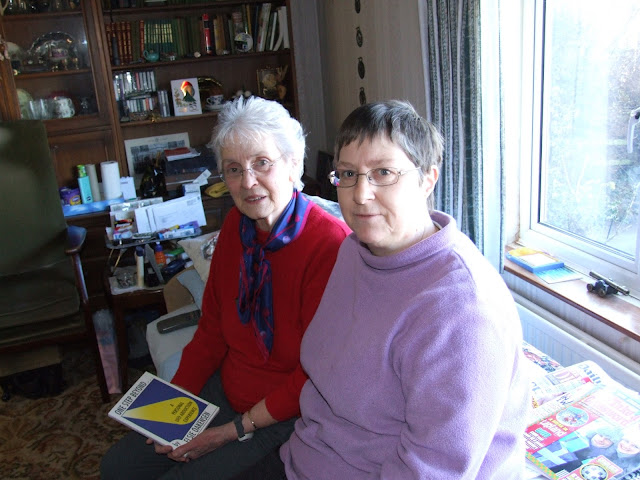 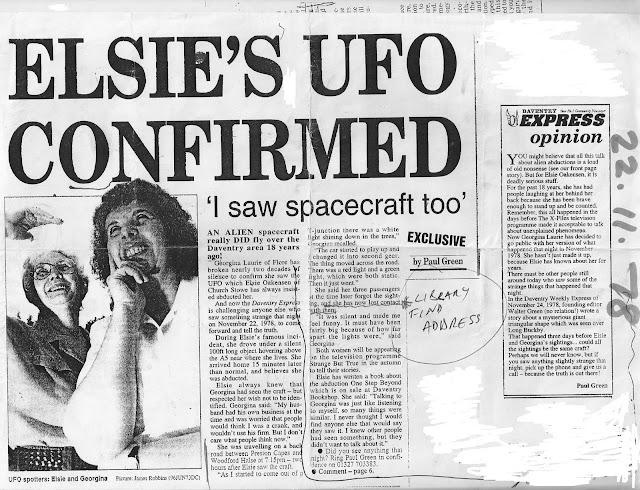 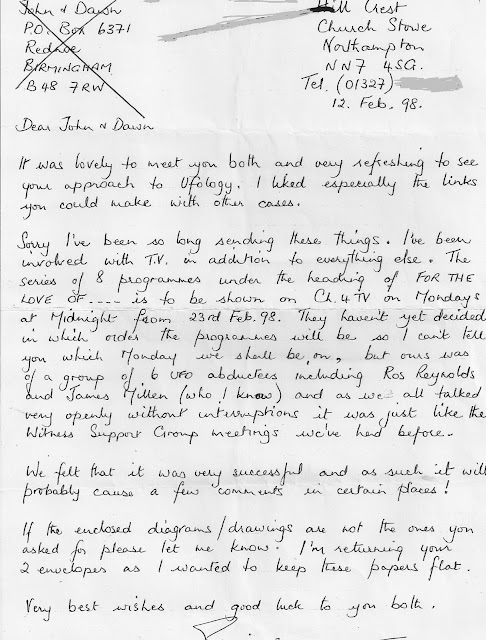 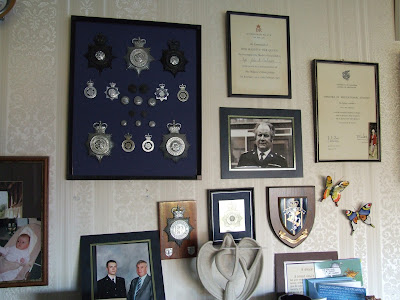 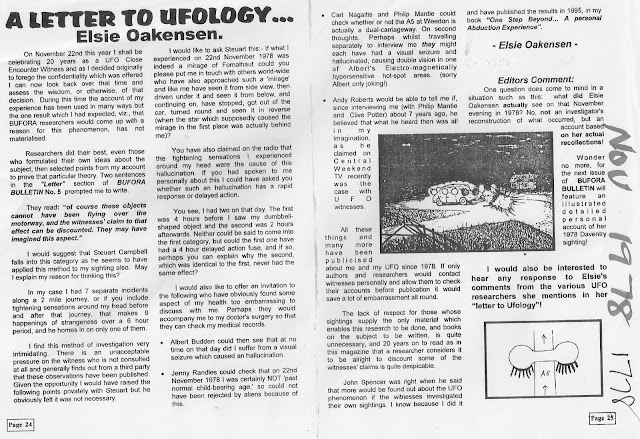 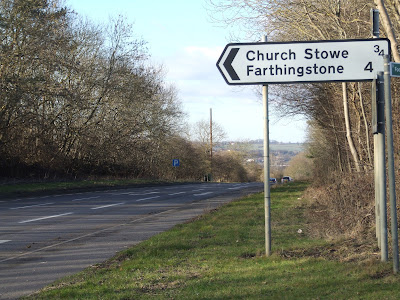 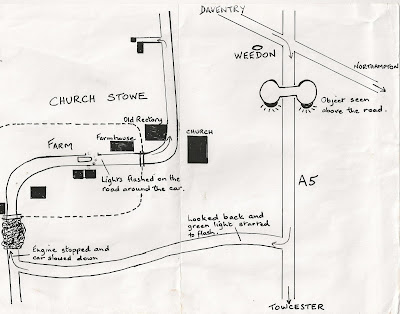 Volume 7 produced by us has a look inside search facility on Amazon.

Volume 8 which is in colour has been finally completed.
Unfortunately we ran out of room, and had to leave it at
420 pages.   The book covers the first 11 months of 1980
followed by our examination of the events that took place
in Rendlesham Forest a mind boggling 32years ago!

Although the book is finished it will not be published without
getting it approved from certain paries invovled in the book,
we anticpate that it will be published in June followed by Volume
9.
Yesterday I was speaking to Brenda about her forthcoming
new book published by Capel Ban publishers written by her
and Philip Kinsella, which is hoped to be out in June 2013.

Volume 9 which covers the period 1981- to hopefully 1985
is also ongoing. At the moment I am scanning in the various
images from each year, and Dawn has began proofing the
pages before they are sent to Bob Tibbitts who prepares the
word ready PDF which will be sent off to the printers
Lightning Sources

If anyone has information regarding UFO sightings or UFO
groupsor anything they would like us to use please in the books
can they contact us.
We are still looking for people who may wish to submit illustrations
for the book, they are in short supply…..But so far we have managed
ok. Robert Townsend who paints the images has been sending us
some thanks so much Robert for all of your help.

Went to the Hot Shots snooker hall in Oldbury a few nights ago and had
a great talk with David Hodrien, his Dad and other members of BUFOG.
It was a four hour talk followed by a two hour talk in the car outside McDonalds
really enjoyable evening. We have nothing but praise for Dave and his group
we felt very much part of the family!  By the way Kevin Goodman you left your
Aunt Bessie apple pie in the corner behind after your last talk!

Richard Hall came to see some weeks ago, here is a picture of him. At the
moment we are struggling to get hold of him to send the images relating to
Volume 5 and 6 of which he interviewed me about..... 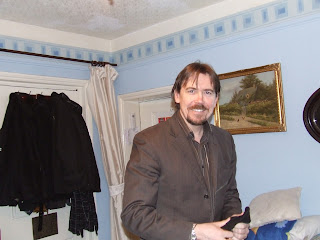 I was saddened to hear of Reg Presley passing away, I never met him
personally but enjoyed chatting to him over the years. 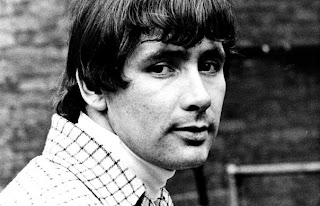 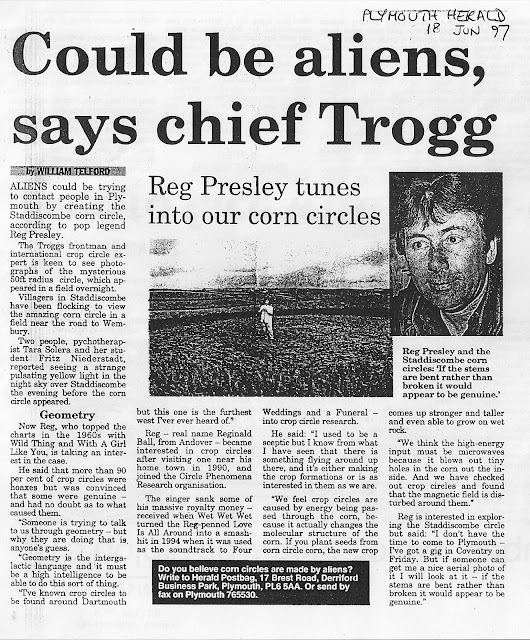 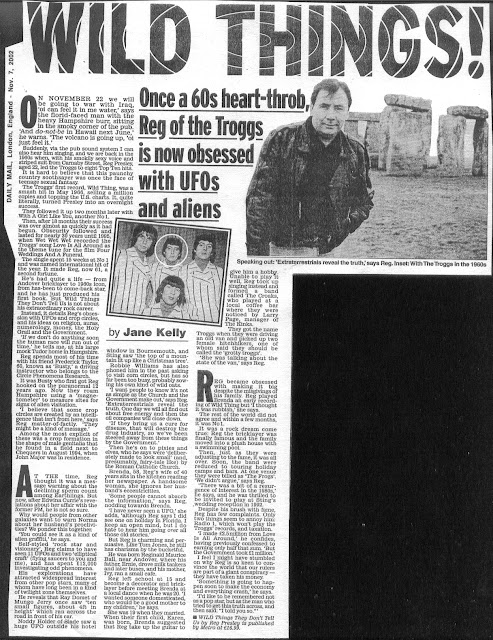 Here is a photo of what I belive to be injured Serviceman on their way
to the Q.E Hospital in Birmingham. They are the real Heroes! 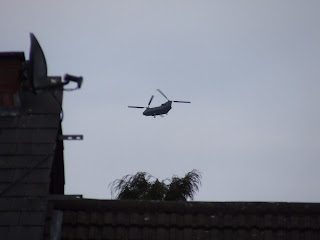 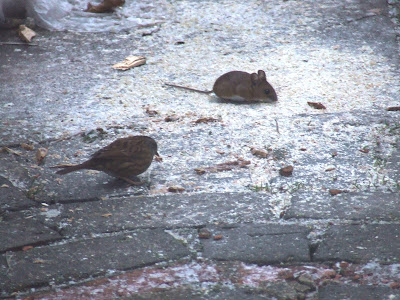 Sad news from Don (Im sorry its late getting onto the blog) one of his kitten was
knocked over on the road and killed. Don is a dedicated animal lover and has
fully supported us over the years. 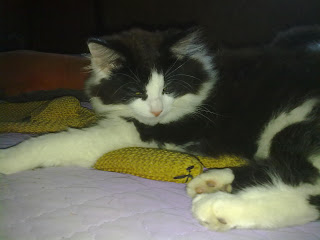 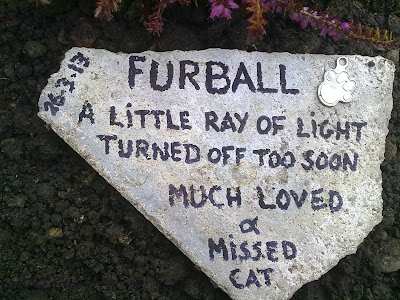 This woman appeared on the This Morning TV a couple of weeks ago, the producer
telephoned me and asked me if I knew any women that had been abducted
who wanted to go on the show!  I did not delegate anyone- it denigrates the whole
subject -apart from that I felt this is not the sort of article  below which I would
want children to  see on the front page of the Bexleyheath Heath London based News
Shopper newspaper. I made a complaint and sent them this letter....but they never
printed it although they printed others.. 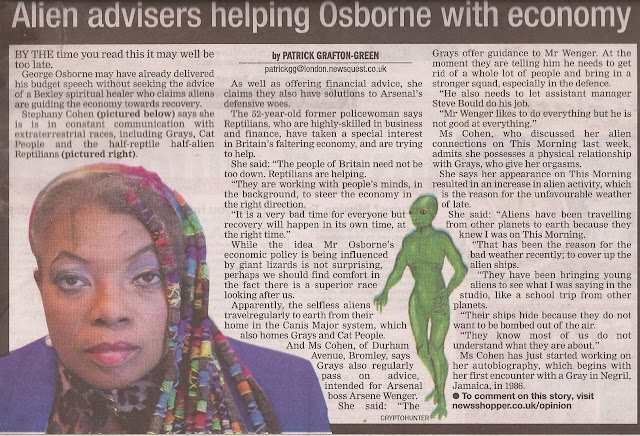 I felt I had to respond to your recent article relating to ex Policewoman
Stephaney Cohen, and her alleged communication with a breed of
Reptilians that have offered her bodily comfort amongst other things!

As a retired Police Officer from the West Midlands Police who spent half
of his service in the CID and then 20 years of research into the UFO subject
with now 7 Volumes of Haunted Skies published cataloguing reported British
UFO activity up to 1980 I appreciate that I can neither prove nor disprove the
claims made by Stephaney Cohen but I regard some of her comments as
untrustworthy and unworthy of comment.

Articles like this which pamper to the needs of the media who insist
(irrespective of the era) on putting their own ‘spin’ on the UFO subject
(borne from scepticism and lack of education about the chosen subject)
with a constant need to denigrate ‘UFO’ sightings and present it as tongue
in cheek rather than having the courage to face up the reality that the UFO
presence is here –to stay.
. 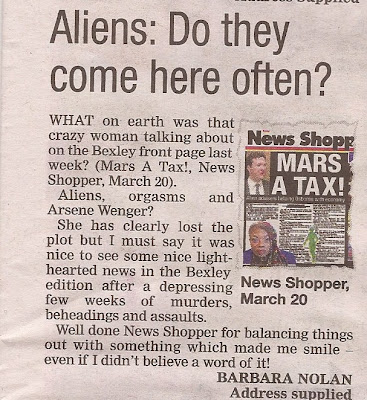 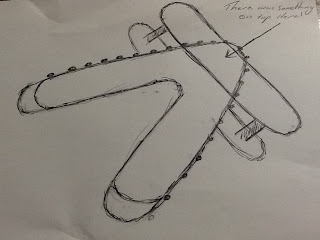 After UFO-PRSA last monthly meeting last Wednesday April 10th six of our committee and members were standing talking in the carpark area, myself, Dom, Darren, Kellie, Mike and Mark. It was around 10.45pm and it was a beautiful clear night sky. While we were talking we were casually monitoring the sky, as one does, watching two aircraft approaching. At first they were side by side, one had the distinguishable red and green lights and strobe flashing it was definitely a plane, we could hear it. The other caught our attention, it was bigger, brighter no strobing and no red and green navigational lights. We were commenting on this as we watched them overhead, the aeroplane stayed on course, from east to west while the other one overtook the aeroplane veering off to the south. We were still speculating about this seconds later when Darren, still looking up, called out what the .... is that, can you see that guys? We all looked up and witnessed this massive craft passing overhead travelling south. It was triangular, boomerang shape, with some type of construction attatched to it, no lights, no noise and it blocked out the stars as it passed. We were all gob smacked, none of us has ever seen anything like this before and we have seen our share of craft and lights in the sky over the years of nightwatching. Attatched is a sketch of what we saw, drawn by Mark.
Myself and 10 or so members had a similar sighting about 6 years ago standing in the carpark talking after a meeting. It was around 10.30pm and we were gathered in the Campbelltown Library carpark ( close to the Arts Centre )  Laszlo drew our attention to a silent object passing overhead. This too was massive, triangular shape but had it's lights on, forming the shape of an arrow. It was silent and blocking out the stars as it passed, so we knew it was a solid object..
Have a look at the sketch, has anyone ever seen anything like this before, we would be interested to know, thank you.
Best Regards Larraine Cilia President
UFO-PRSA  - www.ufosociety.net.au
Phone 0407894835