In defence of the UFO subject


UFOs -The Evidence cannot be ignored.
I felt I just had to reply after seeing the article published by the Sun newspaper dated the 7th of November 2012  submitted by Dr David Clarke(whom I immense respect for) ‘CLOSED ENCOUNTERS OF THE  THIRD KIND’ which is not intended as criticism but to allow me the opportunity of  at least putting the record straight.

As a retired Police Officer who served for nearly 30years in the West Midlands Police Force, I have to say that I have no recollection of any UFO sightings brought to my attention during that time. If somebody had, I would have considered them candidates for psychiatric help or suffering from delusions, or the worse for drink.

In 1995, my son now a Detective Inspector but then a Police Constable and his female colleague witnessed a saucer shaped object hovering over a tree in Stirchley Birmingham, following a report from members of the public which included a Doctor of an unidentified object seen moving across over the City Centre.
Up to then I was sceptical of such matters but decided out of curiosity to conduct my own research into the subject wondering if I would find any evidence of such phenomena. I spent the next 15 years unearthing original sighting reports from members of the public along with my partner Dawn Holloway, speaking to
people who had reported seeing something highly unusual. As far as I remember out of all those thousands of people which included many retired RAF pilots, who I have interviewed over the years not one of them ever claimed to have seen any aliens or have been abducted.  All they wanted to tell me was what they had seen. What I made of it was up to me.

It has taken us all of these years just to document on a day by day basis, those events which are contained
in a number of books entitled Haunted Skies. Volume 1-6 and we only just completed Volume 7 1978-1979 over 400 pages!  In the early days many National newspapers asked us for book and promised us a review so far this has not happened. As I write this intending to form an answer to the article on line, I cannot help but wonder if it will be published.

I have hundreds if not thousands of incidents relating to reports of UFO activity, right up to 2000. They often fall into a number of different categories, many people report seeing what they refer to as UFO displays, followed by the occasion report of what appears to be a structured object In addition to this I have come across many motorists who have been followed by UFOs often along the borders of the County, rather than City. And then there are others who claim to have suffered physical or mental trauma following what appears to be exposure to the fields of energy that surround such objects.

I don’t claim that Aliens or UFOs exist what I do claim is that there is irrefutable evidence of phenomena which is more likely to be indigenous to our Planet rather than the incursions of any extraterrestrial life force.  I also feel that this evidence should be preserved as forming a very important part of our Social history, and will continue to do so if only to salute the courage of so many who have decided often in the face of ridicule to tell us of the experiences. In my opinion they surely exist if they didn’t the evidence would indicate otherwise.  John Hanson 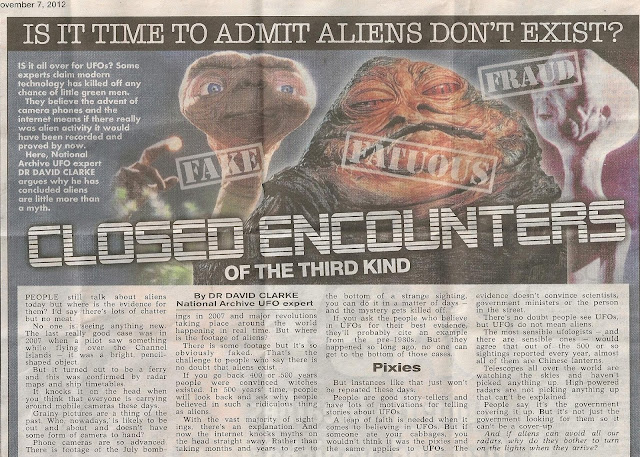