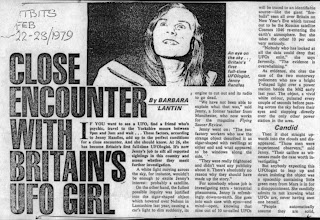 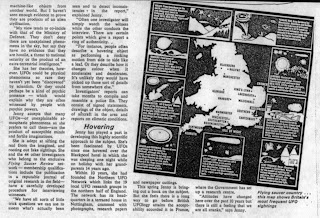 Congratulations to Jon and his CFZ crew for another Weird Weekend. Sadly, we were unable to get there but wish him and all the people that took time out to go there the best of luck, and hope that the weather was kind to you.

In the meantime, we are trying to update the filing system in our office as it is chaos trying to find anything!

We finally watched (and cringed) at the second documentary with Richard D Hall on the Discovery Channel  - not bad overall. (However, some will not agree no doubt!)

From the Birmingham Group
ANDREW HODRIEN – PSYCHOLOGY AND UFOLOGY: THE BENEFITS AND LIMITATIONS OF APPLYING THE DISCIPLINE, AND AN OVERVIEW OF RESEARCH FINDINGS

Background
Andrew Hodrien has been a BUFOG member since its beginning and has had a strong interest in exploring Ufology for about 20 years. However, for the past 5 years he has been studying psychology with the aim of a career in psychological research into aspects of consciousness, and is currently planning his PhD. He is graduating from The University of Northampton in July and has also been lucky to study Parapsychology as part of his degree, and is currently working on a Remote Viewing research project at the University. For Andrew, delving further into psychological theory and research practice has been the beginning of a new journey into exploring ufology through the integration of psychological research, which he hopes to pursue in the future. This involves both the experiences covered within ufology, exploring the nature of beliefs and scepticism surrounding the field, and how we approach UFO-related evidence which might challenge either our world view or general beliefs on the subject. Regarding sightings and experiences, after being exposed to both UFO-related evidence and studying human nature, Andrew takes an increasingly open-minded approach, being open to all possibilities and endorses true scepticism, rather than closed-minded thinking.

Lecture Overview
Andrew is in a relatively rare position of having studied ufology and being involved with the UFO community, before having studied psychology. Due to his passionate interests in both ufology and psychology, this lecture offers something a bit different to what normally gets presented. It also means he has been exposed to psychology as a discipline from within, rather than how it may be often portrayed within the UFO community and the general media. The lecture will be split in two halves, with the first half covering the benefits and limitations of applying psychology to Ufology, and the second half covering an overview of research that has been conducted. This will also include the first presentation of research findings as part of his degree, involving a small project into the relationship of UFO "belief" and paranormal "belief", but more importantly his dissertation into the nature of UFO "belief" and "scepticism" influencing assessment of evidence, and exploring individual differences between "believers" and "sceptics".

Note: BUFOG is a non-profit making organization. All entrance fee money goes towards paying for the venue and events that we hold.
Please feel free to distribute this advert or post on appropriate forums.

UFO over Walton-on-Thames
In the same month (June 1998) Mr Alan Howard from Walton on Thames who was  very familiar with the passage of  aircraft  and the occasional Airship as used by Fuji and Orange   Telecommunications was sat is his armchair watching TV   when he  noticed an object in the sky  through the window climbing steeply, and presumed it was a balloon that had come adrift, ‘Suddenly it stopped in mid air and  began to   descend in a  falling leaf  motion, before slowly rising upwards I asked my partner Pam what she thought the object to be, and continued watching  wondering if it was tethered to the ground in some way.

Then an aircraft appeared over the trees in front of us heading out of Heathrow, at which point the object whatever it was  raced towards the plane like a missile, and stopped short of the aircraft  in mid air  for a second or two before  moving quickly away into  a nearby cloud, we were both literally struck dumb by what we had  witnessed.

Moments later the object dropped out of the cloud and continued to fly around the sky making impossible tight turns diving and climbing. I went and fetched my camera and took a clip of film of the UFO which by now was quite small through the viewfinder”

Throughout the following days and weeks Mr Howard scrutinised the newspapers hoping to see that somebody else had seen the UFO but found nothing. (Source: UPN Investigations London Elaine Waite)

In the early hours of 25th June 1998, Barry Portsmouth a resident of Chippenham Wiltshire was travelling along the A350 just outside Warminster and Westbury with a colleague when they saw “a number of bright lights in the sky followed by the appearance of a circular object with an orange ‘door way’ hovering above them, that followed them all the way to Chippenham, but disappeared when they entered the town.

We found ourselves in Westbury with stinging watery eyes, and out of character headaches when we should have entered the outskirts of Warminster never mind any answers to the lost time incurred, we started worrying and had terrific headaches and our eyes started watering and stinging, strangely  although there was traffic coming in the opposite direction  we didn’t see or crash into anything coming our way “ (Source:Chipppenham News  20 July July 1998 ‘UFO tails men for over 30miles)

At 9.10am 30th of June 1998 Mr. David Dunworth, his wife and a friend were near St Mounts bay Penzance Cornwall when they sighted a bright white object in the sky resembling the ‘O’ on a keyboard, in image.  ‘Trailing and circling a jet aircraft, en route to London& Europe, heading eastwards, about one inch in arc above the tail of the jet. It then began to fade in colour and eventually disappeared from view” (Source: unnamed newspaper) 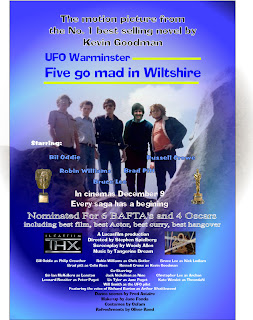