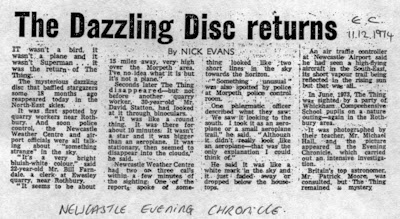 We are pleased to say that we have a new press flyer: 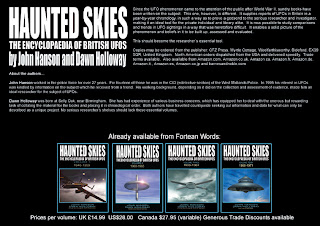 And we are also delighted to report that, following a visit to see Jon Downes and his lovely wife Corinna (and long-suffering dog Prudence) Volume 5 is starting to take shape. 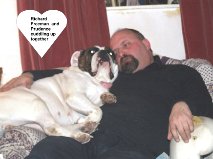 The foreword is by Matt Lyons, the chairman of BUFORA, who says:  “BUFORA highly recommends the whole series of Haunted Skies.” Incredibly, this volume only covers the period 1972 to 1974 inclusive, and shows once again what UFO activity was all about during the latter part of the 20th Century. 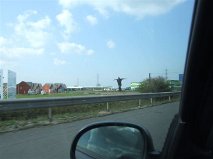 On the way  home from Devon

Whilst at Jon and Corinna’s, we had the pleasure of meeting Matthew Osborne and his wife, Emma.  Emma has kindly offered to widen the parameters of the Haunted Skies Facebook website.  We thank her wholeheartedly for doing this – in an ideal world we should be taking on this task, but - unfortunately - we are bogged down with completing the final PDF for Volume 5. This book covers some incredible cases:  a close encounter sighting from the Tewkesbury area when a UFO was seen settling between the houses.  This is followed by a report from a Sussex councillor who saw a similar object, this one containing three occupants none of whom appeared to be human!  Quote:  “..... returned my gaze it would have gone, but this didn’t happen. Unbelievably, I could see three ‘figures’ standing inside the dome. Two looked like the entities now referred to as ‘Greys’, although l was unaware of such terminology then… ”

Our visit to Gordon Creighton, Editor of FSR
Towards the end of the 20th Century, we contacted Gordon Creighton, the Editor of Flying Saucer Review, and asked if we could visit him at his home address in Rickmansworth, Hertfordshire. Gordon agreed to see us, but pointed out that over the previous few years he had been contacted by many people in the media who had expressed a wish to interview him, but none of them had ever arrived!

Furthermore, he told us that since 1981, he had been prevented from airing his views on the radio and the TV, and that the authorities had effectively banned him from speaking about the UFO subject. We thought he was over-reacting!
Sample of Chapter Two – 1973:
UFOs over East Yorkshire, UFO near the M10 flyover, UFO over London; UFO Display over Bournemouth; UFOs over Warwickshire; UFO sightings, The Wessex Association for the Study of Unexplained Phenomena - Silver ‘Rods’ over Hampshire; UFO over Cheltenham; RAF Pilots sights UFO; Soldiers sight UFO;  UFO over Northumberland; UFO over Wales; UFO over Birmingham; Mystery Lights over Warminster; UFO at Cradle Hill, Warminster; UFO over North Cornwall; close encounter, Scotland;  close encounter, Northampton.

Peter Hough, who has been assisting the authors
Posted by Corinna at 14:37