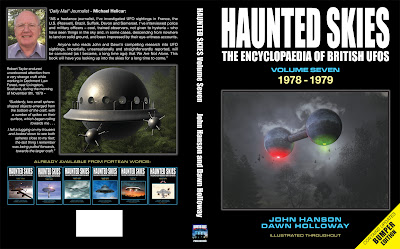 VOLUME 7 Haunted Skies 1978-1979 Bumper edition coming soon.........................
Well Volume 7 is drawing to a close Bob Tibbitts who is typesetting the work is nearly completed
This has been a mammoth task, but we believe the reader will enjoy reading exactly what took place all those years ago, knowing that this is unique material, and forms part of our social history.
Its been a long day for me I was up to 1.30am sending Bob the1977 mass of sightings and reports all of which have to be checked and inserted onto Microsoft word documents before Dawn starts proofing them.
Request from Mathew Dell

Any body out there with reports of Shadow Men!Dear Mr. Hanson, I recently conducted an interview with Jonathan Downes regarding a book I am writing regarding shadow men. After the interview I asked him if there were any other people I should talk to regarding this phenomena and he gave me your email address as he thought you may have some information I could use. I’m looking for any first hand accounts or witness reports of people who have encountered shadow type entities especially if the got a good look at the and not just out of the corner of their eye. As I feel this stands up to scrutiny better and generally yields more details. Any help and advice you could give on the subject would be most appreciated. UFO over London

Paul was between 15-17 yrs old and living with his mother Ivy in a ground floor council flat at 24, Kent Court, South Hackney, next to Queen bridge road during the early 1980’s
One evening he arrived home at around 9 pm, but was unable to get into the flat as he didn’t have a key.   After several knocks on the front door, and receiving no answer although the lights were on, he presumed his mother was probably in Bill’s house next door at number 25, as they were on good terms with him. Paul decided to make his way to Bill's flat. As he was about to walk left into Bill's pathway his attention was drawn to a high pitch wailing sound noise , child like in some way that was coming from upstairs in the block, a little further down on the top landing. His first thoughts were could it have been children, unusual as to his knowledge there were no children up there
“I began to sense a spiraling movement directly above me, which at first, made me think that someone was shaking a carpet over the top balcony, creating a swirling distorted image. The sounds along the top landing had distinctly given way to a contrasting silence, as I began to study intently, this rather unusual pattern of movement, which clearly was not a carpet being shaken over the balcony, but something much higher up , higher than the balcony , and it was moving fast , spiraling erratically above Kent Court, which is 33ft high. I speculated on whether it was possibly some dark grey pigeons from the roof, fluttering and flying around in a circle formation but, at that time in the evening seemed very odd indeed. Then to my sudden amazement, from this dark rotating movement began to emerge a very solid structure , spinning itself in complete silence , almost indistinguishable against the Hackney night sky.
It started to slow down, quickly, in a very controlled manner. It reached a pace of rotation that enabled me to see into it's curved inner structure very clearly. It was a concaved shaped design of strong dull- dark grey metal. It's appearance was so strikingly dull that it matched the very sky itself that it was spinning in .

To see how this object used this perfect camouflage was very impressive indeed. The dull grey metal , turning in the sky , up there in the heavens , spiraling around like a piece of magic before my eyes , rotating steadily , behaving like an inner-drum of a washing machine , and with a Saint Paul's cathedral inner -globe presence and  magnificence about it . Although this object was displaying this incredible technology in front of my eyes, it also had an ancient, timeless aura.

I could really sense some very strong powerful mechanics pulsating through this heavy looking structure, enabling it to somehow remain stationary above Kent court .”Paul gazed in absolute wonder at this spinning concaved spectacle in the sky, which suddenly moved slowly and gently backwards . At this point, because of the building (Kent Court) which was directly in front of him, he lost sight of it and was left staring up into a blank sky. 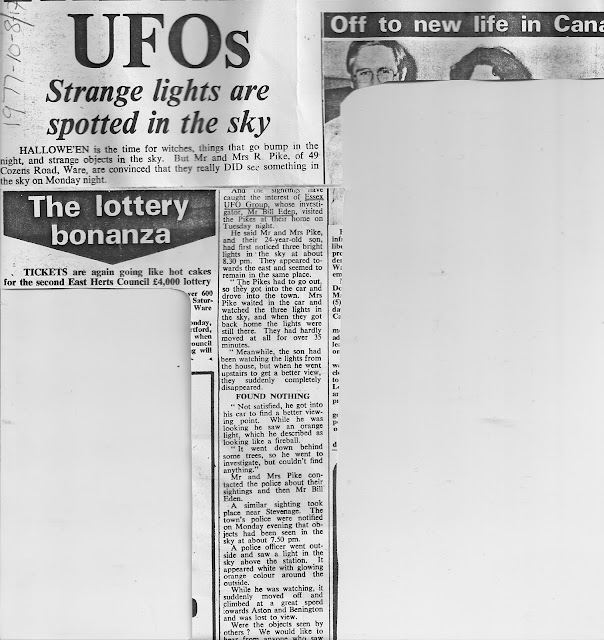