Haunted Skies our trip to Suffolk 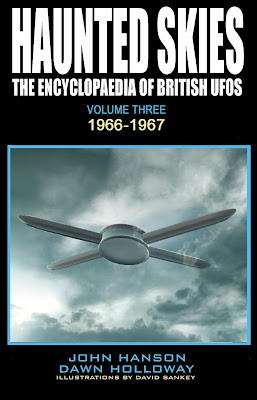 From J. H. Davies
This review is from: HAUNTED SKIES Volume Two (Paperback)This is the second of a four part series of books on British UFO sightings, this one detailing the period 1960-1965. The authors have mined great depths to pull out newspaper cuttings and accounts from the swinging 60's, many of the accounts have been buried for years i.e. black triangles almost identical to those acounted in modern times and another forgotten incident in rendlesham forrest/woodbridge in 1961. I cannot wait for the next instalment, if the authors are reading please let me know when it will be published so I can get in a pre-order! Bravo!

This review is from: HAUNTED SKIES Volume One (Paperback) I first met John Hanson about 15 years ago when he had plans to write a book. Since those early days John has gone far - becoming a well known and respected UFOlogist.

This is an impressive and mammoth task to undertake - a four volume set of books that deals with the history of British UFO sightings. This first volume deals with the years 1940-1959. In these pages John and Dawn give a broad selection of UFO reports from the various years. Many of them will not be known to readers as they come from the author's own investigations. The book is better for this approach I feel, as it saves going over the same old ground of well known cases. There is also a broad geographical spread for all the cases, although I found myself being drawn to those from the Midlands. And there are some classic cases here - alien contact case from Kidderminster in the 1940's, not to mention the famous Cynthia Appleton case from Birmingham in the 1950's. My only minor quibble with this first volume, was the inclusion of a case from (again) Kidderminster that involved `burn' marks in a field. There were no accompanying reports of UFOs or other anomalies. So why the mention in the book? As this is a history of British UFO reports, I would have liked to have seen more historical sociological context for reports, which are very much `of their time'. But that aside, this is a great book that deserves to be read by all serious researchers. Bring on Volume Two!

This book is amazing. You will not find another as detailed, articulate and in depth like this. Unique is the word. The authors have tried to put in as much information about each ufo case as possible. The amount of research and time spent on these volumes is incredible. The authors are a credit to the UFO subject. You will not be dissappointed.
Our trip to Suffolk.
Last Friday morning we set off at 5am to drive down to Leiston in Suffolk to 'babysit' the household pets belonging to Brenda Butler in order that she could make the journey up to Blackpool for the LAPIS Conference. When we left the morning was shrouded in early morning mist which was quite eerie. We passed the unforgettable sights of cows heads sticking up through the blankets of mist covering the nearby countryside and wished we could stop but the A14 is not the safest place to park. 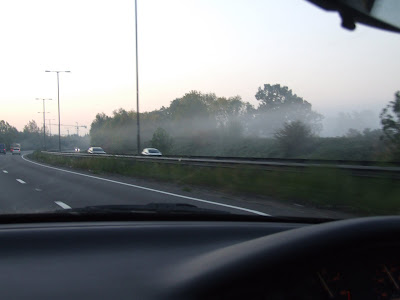 We were fascinated by the small cloud in the sky,was there a connection with what was seen by David Bryant and his wife Linda while driving (unknown to us ) along the A14 in the other direction during that same early morning? 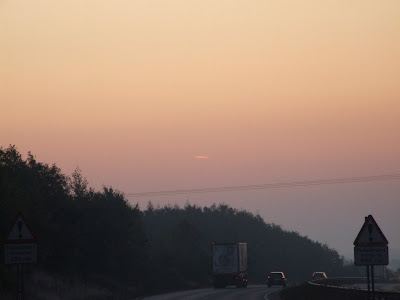 Within a short time the sun rose upwards into the sky a great golden ball,scattering beams of light across the great swathes of mist that flew overhead a very odd sight, as we passed underneath it. 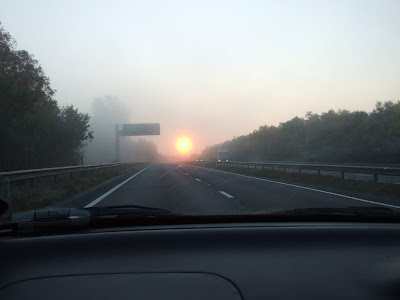 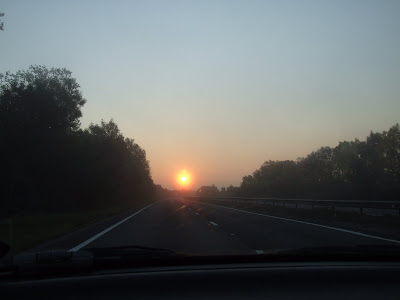 On our arrival at Brenda's house there was little time to catch up as Brenda was eager to make the eight hour journey to Blackpool. Here is one of her cats, 'Cammie' 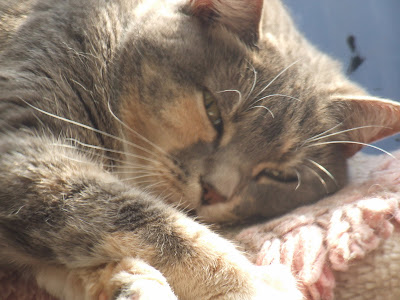 After a nights sleep we trawled the local shops and then made our way down to Rendlesham Forest, which seemed so different by day with Mums and Dads pushing their prams through the forest, on what was a glorious day with a perfect blue sky
We had to stop on our way to take this beautiful photo of a field with its carpet of blue flax 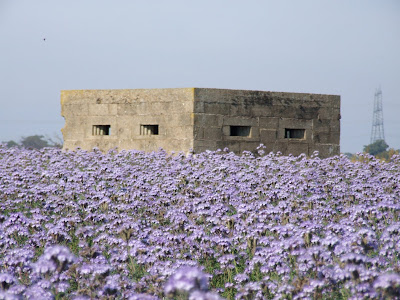 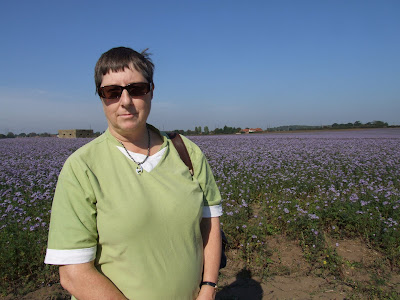 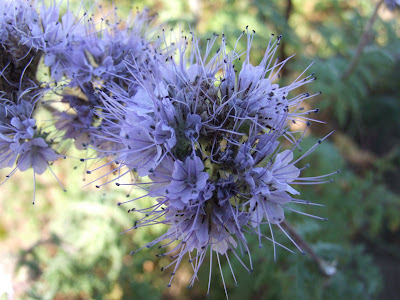 Just before Wantisden, we came across a field showing an odd 'oval' of removed crop
approx 30feet wide by 10feet wide. What had caused this? The farmer or was it a crop circle? 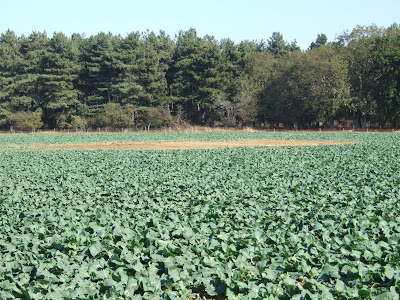 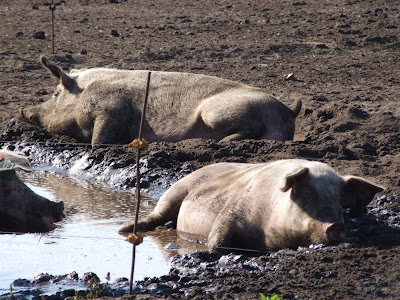 It was a hot day the pigs were just chilling out! 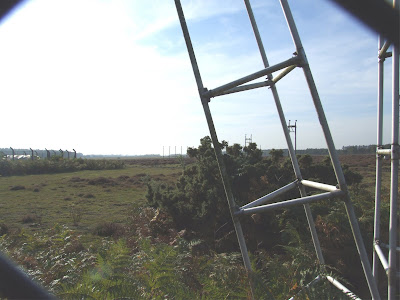 And then on to the Forest, look at this photo it would be be so easy to make the wrong judgement call here! (Look at the end of the track)? 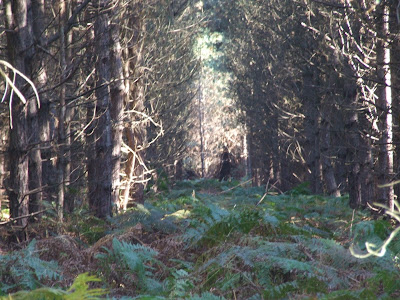 Dawn stands by the awful tacky sign...replete with alien face!! 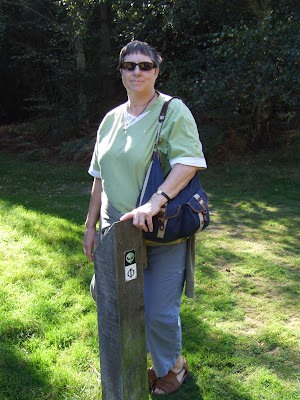 The view overlooking the field nomiated by Larry Warren as where he saw the UFO land in 1980. Incidently the location nominated by Colonel Halt lies off the side of the same field some couple of hundred feet away, once more signed by those awful alien signs. 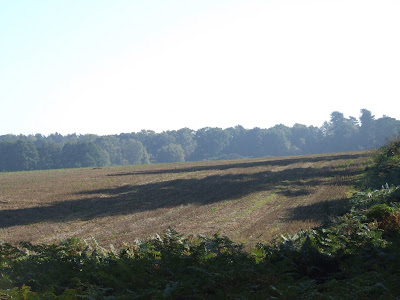 As we sat down on the wooden seat overlooking the field my attention was caught by an insect straddling a coccoon underneath him (or her) and using their legs to propel the 'container' up the slope, was this a store of food, could this be a dragonfly? Hopefully some one will put me out of misery with this, I might know UFOs but insects, thats another world to me. I was so proud when the insect managed to get to the top of the slope..........Jon Downes tells me that it is a parasitic wasp! 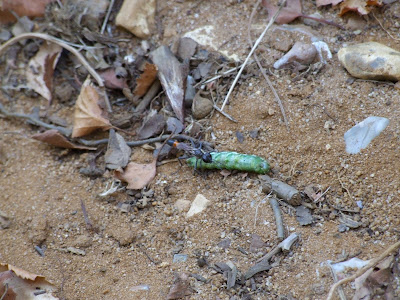 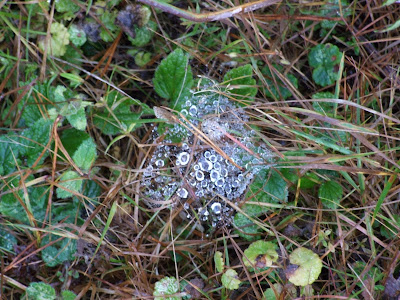 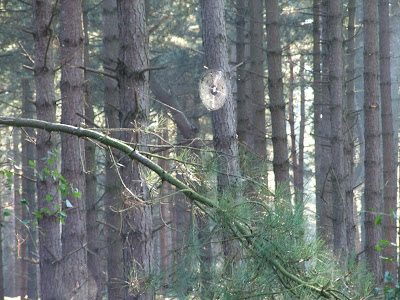 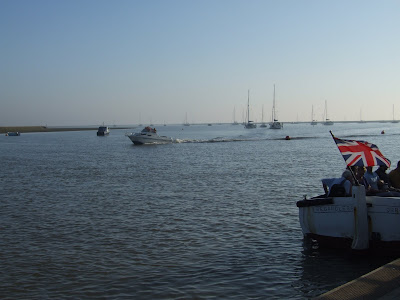 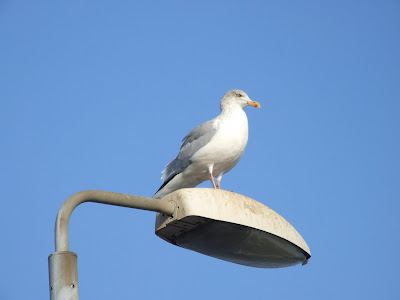 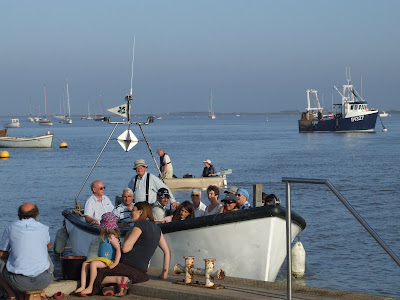 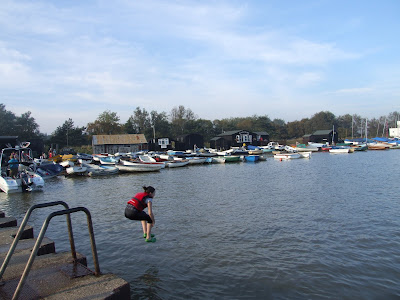 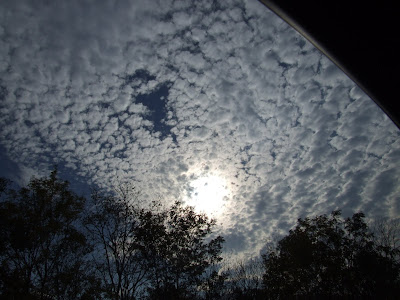 The sky over Cambridge on our way home...

This month BUFOG will be showing the documentary Dan Aykroyd Unplugged On UFOs, starring the extremely likeable Hollywood actor himself! There will also be the usual sightings update, videos, raffle and other UFO related info which you've come to expect from a BUFOG evening

2001 was a real space odyssey for me. Instead of flying on a spaceship to the moon, Jupiter, or beyond the solar system, I met Dan Aykroyd for the first time to talk about UFOs. That’s when I knew I had to sit him down in front of the camera, just let him talk about the truth and make a documentary film out of it. Because if I didn’t no one would believe we had this amazing conversation.

In this long conversation with Dan Aykroyd about UFOs, I thought it was like Einstein was hiding inside of a comic genius, just so that if he told us the real truth he wouldn’t have to believe it. If Einstein had told us UFOs were real, would we have believed him? He never spoke about it. But Dan Aykroyd speaks about UFOs as if he were a full professor on the subject. Hollywood star Dan Aykroyd, who is a believer in the existence and government cover-up of alien life-forms, hosts this look into the phenomenon of UFO sightings. Akroyd shares his personal experiences in this field and also discusses recent findings with author and UFOlogist David Sereda. DAN AYKROYD UNPLUGGED ON UFOS features UFO footage as well as testimonial material from Astronaut Gordon Cooper and others, including former president Ronald Reagan.

Hope to see you there!
Posted by Haunted Skies at 14:15